In a move which no doubt has American immigration officials baffled, the Swiss are denying citizenship to Muslim after Muslim for failing to integrate into their society.

In this latest case, two Muslim girls were denied citizenship because they refused to swim in a pool with boys present.

In Switzerland, unlike in the United States and many other countries, integration into society is more important for naturalization than knowledge of national history or politics. Candidates for citizenship must prove that they are well assimilated in their communities and respect local customs and traditions.

In Switzerland, local town or village councils make initial decisions on naturalization applications. If they decide a candidate is not an upstanding member of the community, the application will be denied and not forwarded to canton (state) and federal authorities for further processing.

Probably one of the reasons they're the happiest people on earth.

I really don't understand why Obama is having such hard time with the concept. If some place on earth breeds people who have nothing but hatred for America and often turn to terror, why not pause any migration from there? I sure bet he'd think harder about this if those people were going to same places his kids were.

And that is the main difference, local government is the way to go.

In this country we have an asinine bitch telling everyone how we should live, as if he knows best, when in fact he doesn't even know he doesn't know. He thinks he is cool...

And now it will get worse with the Clinton bitch, equally ignorant, and more evil. Perhaps WW 3

And I always thought that the test was to disassemble and reassemble a Rolex in 90 minutes.

They could never do this if they joined the Euro. They would have to deal with hordes and hordes of jihadis and feed them and clothe them too.

The American Global Dictatorship tells the EU what to do & they do it.
They are nothings. Could be because they are as stupid as American voters.

Could be because they are as stupid as American voters

Hard to imagine any voters as ignorant as the US voters.

At some point China is going to blow the US out of the water, man is our stupidity going to show then.

They could never do this if they joined the Euro. They would have to deal with hordes and hordes of jihadis and feed them and clothe them too.

Poland, Hungary, and I think Slovakia aren't taking in refugees.

Wait, so admission into a country is decided by the locals of the town the immigrant wishes to join!? Imagine if that happened here how many immigrants would make the cut...

I mean what else could anyone hope for for entertainment?

I should think it would work rather well! I have plenty of Latino friends and coworkers who fit well and nobody would want to see leave. They mostly aren't illegals, though. Although I am unsure on the status of my housekeeper. She's a recommendation from a friend and all her clients pay under the table so... She sure does a good job tho!

In a move which no doubt has American immigration officials baffled, the Swiss are denying citizenship to Muslim after Muslim for failing to integrate into their society. 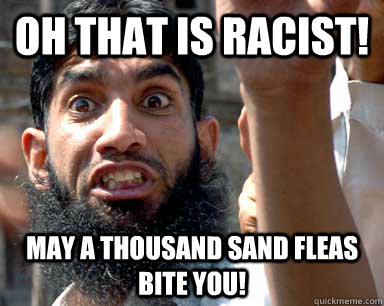 Swiss village chooses to pay £200,000 fine instead of accepting 10 refugees as 'they won't fit in'

"We have worked hard all our lives and have a lovely village that we do not want spoiled."
16

In other words, Switzerland does NOT have a racist immigration policy.
20

unlike in the United States

Actually, once you factor out Islam, many other ppl of the world will assimilate into American society, just look at the Vietnamese, Nepalese, Cambodians, & Haitians. These are people of color but don't plant bombs in their new countries. Instead, they are law abiding citizens who contribute to their adopted country.
about   best comments   contact   one year ago   suggestions